Virgin American in Virgin Airlines tradition brought innovation and got to be known as the better customer experience airline and gained good loyalty. It is disappointing that for their credit card partnership they have chosen Comenity Bank which seems to be the opposite. The card like other airline cards provides benefits such as geting Elevate®(Virgin America loyalty program) bonus points, earn up to 3 reward points per $1 spent, get free first checked bag on Virgin America Flights, get $150 off a companion ticket every year, 20% discount on RED™ in-flight purchases. But it comes with annual payment. There are two types of card the regular and premium. The premium has three other benefits: no change or cancel fees on Virgin flights, you can earn up to 15,000 status points and you can carry forward up to 10,000 status points. The regular card has a $49 annual fee and the premium $149.

This is all good however, I had the worst experience with Comenity I used it once or twice and never received a bill. I called the customer service and the address was correct but they assured me that all is well anyway I paid off and lost all my motivation to use the card, finally this year after noticing that I was charged an annual fee for a card that I don't use decided to cancel the card. So I called and cancelled, of course the customer service is very courteous and (follows a script very well).

To my surprise 10 days later I get a letter that the card was cancelled and I am responsible for the balance and will receive bills until it is paid off. Of course I decided to call in but no telephone number on the letter and I had already destroyed my card after the cancellation, so after fishing for the number online I called and asked for a supervisor who apologized and credited my account with annual fee that was charged and assured me this was the end. Two days later I get a call early in the morning with no message left. The number was from Ohio which I did not recognize (614) 729-6083. So I Googled it and found out a lot of people have been complaining about the number calling so I tried the number and of course after it said Comenity Bank I held on. After a few minutes someone got on the phone asking me for information which I was not prepared to give so she said she will take my phone from the list to call.

I though that was a sales call and thought that is over. Well I got calls again and finally after answering I found out it is Comenity's Collection Department so again I had to explain that I had cancelled the card and the balance which should have been credited was the annual fee. So she said she noted. But to be safe I called back the customer service number and had to spend 2o more minutes and speaking to three different people to find out that the bank had added late charges again, so finally they agreed to reverse it then I asked them to let their collection department know that there is nothing to collect, they tell me they can't and they will note the account. Finally after elevating it to the supervisor, I was assured again that it is over and will not be disturbed. I am waiting and I hope this is the end. Probably one of the worst experiences canceling a card! I think Virgin American should re-evaluate their choice of partner for the credit card before their reputation is also effected. Checking on Comenity Bank homepage their tweets also reflect how often they have to apologize... see image below 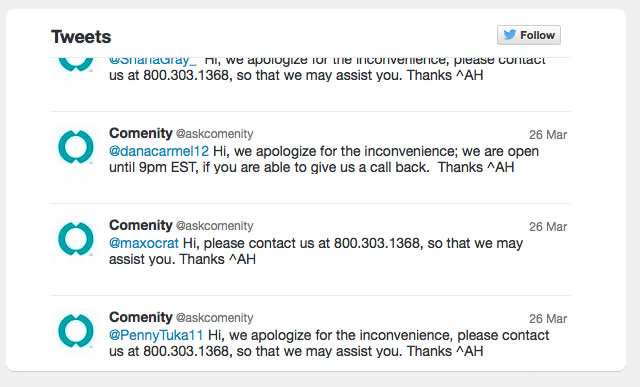 Select From All Categories